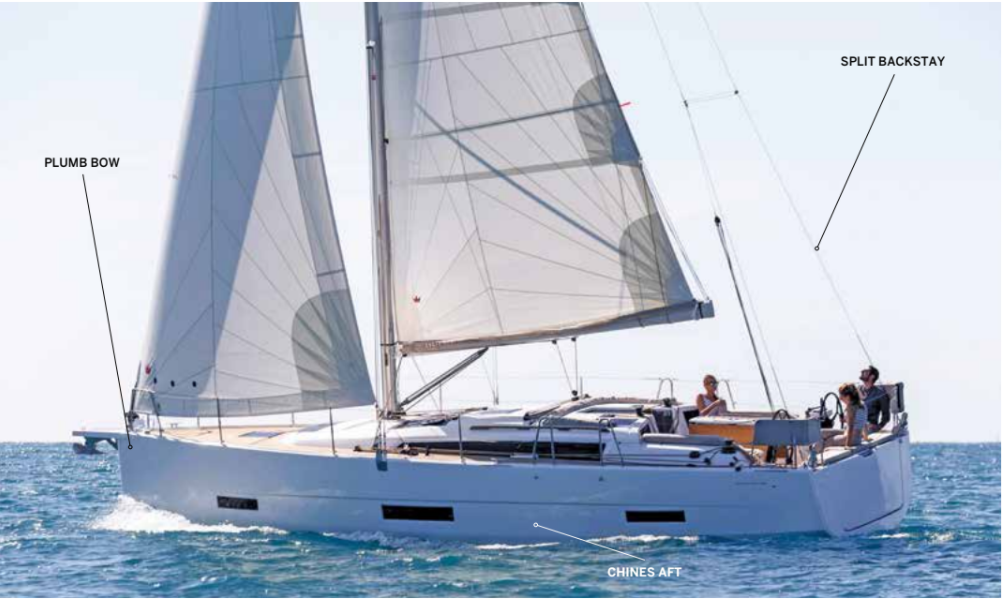 The boatbuilding scene in La Rochelle, France, was significantly transformed in 2018 when the town’s largest catamaran builder, Fountaine Pajot, acquired the town’s largest monohull builder, Dufour Yachts. Soon afterward a revised design brief for Dufour’s popular Grand Large line of cruisers was introduced, the vanguard of which was the new Dufour 390. The redesign by Umberto Felci features a sexier cabin house, more beam aft, and pronounced hull chines running two-thirds the length of the boat. All of which makes the Grand Large concept even larger than before.

The hull is solid hand-laid fiberglass set in polyester resin, with neopentyl glycol (NPG) resin in the gelcoat and the first exterior laminate layer to increase osmosis resistance. The deck is a polyester resin-infused sandwich cored with polyurethane foam. Nearly plumb ends fore and aft serve to maximize sailing length. The aforementioned chines increase usable space belowdecks and also promote form stability and sail-carrying ability. The deck is both bonded to the hull and through-fastened with the same mounting bolts used for the cleats and stanchion posts. Floors and bulkheads are laminated into the hull and also bonded to the deck overhead, creating an especially strong overall structure. Single outboard chainplates bolted to either side of the hull support a tall, fractional rig with wide swept-back spreaders and twin backstays. The standard aluminum Z-Spars mast is deck-stepped. A carbon rig is available as an option. Ballast in the L-shaped keel is cast iron.

The 390’s wide cockpit easily encompasses twin helm stations (connected to a single spade rudder) and a large, fixed drop-leaf cockpit table with a good deal of storage space in its pedestal. An equally large fold-down transom provides unimpeded access to the water for both bathers and dinghy boarders. Our test boat was equipped with an optional outdoor barbecue/sink hidden inside the aft bench seat behind the port helm, oriented aft, toward the fold-down transom. As is de rigueur these days, all control lines from the mast are led under the deck to batteries of rope clutches and a pair of winches on the coachroof to either side of the companionway. A double-ended German mainsheet system controlled via a wide cabin trunk-mounted traveler runs to twin winches outboard and just forward of the helms. From there they can be easily managed by a properly positioned helmsperson. All winches are Lewmar 40s, which are, I thought, a bit undersized. You’ll likely want to order larger ones or plunk down for a set of optional electric winches (two for the mainsheet ends, one for the main halyard), as had been done for our well-equipped test boat. 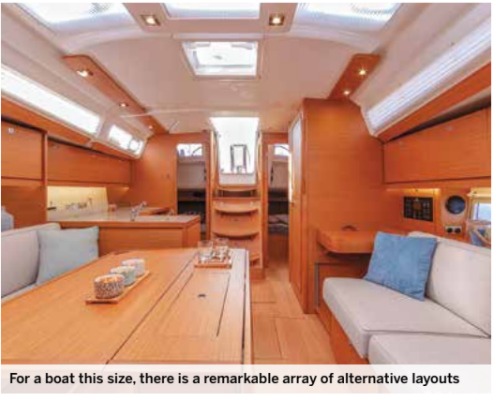 For a boat this size, there is a remarkable array of layouts. Our test boat featured a single aft stateroom with a very wide transverse double berth. To port, I found a large head with separate shower space, behind which lay a large systems/storage space that could also be accessed from the cockpit. Forward I found a master stateroom with a V-berth and small ensuite head. The L-shaped galley at the foot of the companionway boasted a small two-burner Eno stove and a large Isotherm fridge with both top and side access. Four different variations of this perfectly sensible arrangement intermix twin aft staterooms, a smaller aft head, two aft heads, no forward head or a port-side, inline galley beside the saloon. Personally, I’d opt for what I saw on the test boat, but with the forward head deleted, as I found it to be a bit too small and it makes the forward stateroom feel more cramped than necessary. Four of the five layouts involve a fairly conventional saloon forward of the L-shaped galley. This stars a large centerline dropleaf table embraced by full-length settees to either side. The port-side settee has a small nav desk at its aft end mounted on vertical tracks so that it can be slid down and topped with a cushion to further lengthen the settee when the desk is not in use. 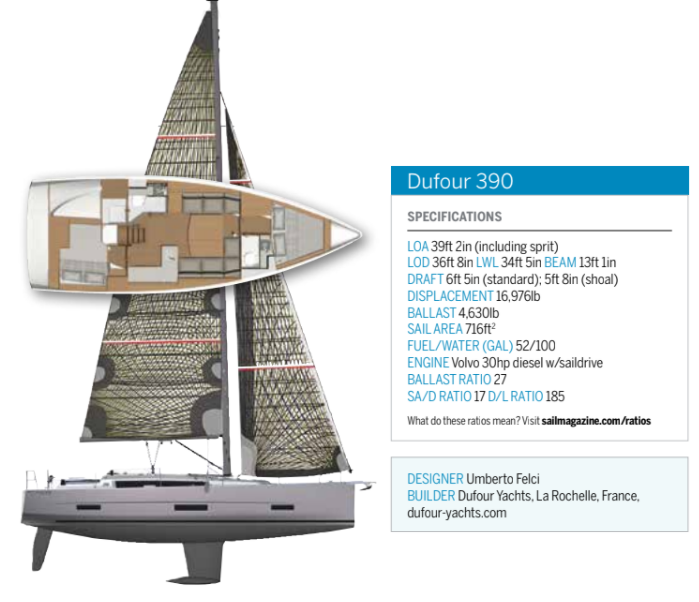 As is so often my fate, I test-sailed the Dufour 390 in frustratingly light conditions on the Chesapeake Bay immediately after the Annapolis sailboat show. That said, the 390 did surprisingly well, given the lack of wind. Our test boat came equipped with a narrow self-tacking blade jib sheeted to a transverse track just forward of the mast. Nonetheless, even thus handicapped, it still sailed a solid 3 knots over the ground close-hauled at a 40-degree apparent wind angle (AWA). I was impressed. We would have been faster with the alternative 105-percent overlapping headsail sheeted to a pair of side deck tracks. Although, at the same time, we would, perhaps, not have been quite so close winded, as these, to my eye, looked to be a bit far outboard. Fortunately, our test boat also carried a Code 0-type headsail tacked to the small combination anchor-roller and sprit jutting forward of the 390’s rakish plumb bow. With this big boy flying, I found we could still pinch as high as 45 degrees off the wind, but were fastest at a 50-degree AWA, where we saw our speed over ground climb to 5 knots and the apparent wind speed crawl up to 8. Inevitably we saw our speed decline as we bore away to a beam reach, making us wish we had a spinnaker aboard. The feel of the boat throughout, in spite of the light conditions, was positive, with the helm well balanced and quite stable.

The standard powerplant on the Dufour 390 is a 30hp Volvo diesel turning a fixed prop on a saildrive leg. Our test boat came equipped with an optional 40hp mill and was gratifyingly quick under power. A low setting of 1,800 rpm produced 6 knots over the ground. At a cruise setting of 2,100 rpm, we gained a solid knot of speed, and with the pedal to the metal, at 2,900 rpm, were ripped along at over 8 knots. The boat also turned very quickly, spinning about within a boat length, and was easy to control when backing down.

With its multiple layout options, the Dufour 390 can be configured to meet the needs of most cruisers looking for a boat in this size range. Its rig is easy to handle, and I was properly impressed with its light-air performance. Given the boat’s pedigree, I imagine it will be a solid performer in stronger conditions as well.

*This article was original published in SAIL Magazine and has been posted to the Atlantic Cruising Yachts blog with permission from SAIL Magazine.

We use cookies and similar technologies to recognize your repeat visits and preferences, as well as to measure the effectiveness of campaigns and analyze traffic. To learn more about cookies view our Privacy Policy. By continuing to use our site, you consent to the use of cookies.